A robust drone for aerial shooting with your personal GoPro

GoPRO 3 and 4 Action cam users will love the Xiro Xplorer G as it will allow them to enjoy new points of view. With this drone, your camera get higher and higher. Start shooting breathtaking aerial shots.

The Xiro Xplorer G will seduce sports camera owners looking for new points of view. With this drone, your camera is gaining height and allowing you to shoot some breathtaking videos.

This pack includes everything you need to get started: your Xiro Xplorer G drone with its stabilized 3-axis nacelle in which you can easily place your personal GoPro Hero 3 or GoPro Hero 4 camera.

Your drone – although it is relatively compact with its dimensions of 40cm by 40cm and its 990g – does not have to blush in front of its larger and more expensive competitors. It is able to fly carrying your camera and can be controlled up to 500m via its radio controller. 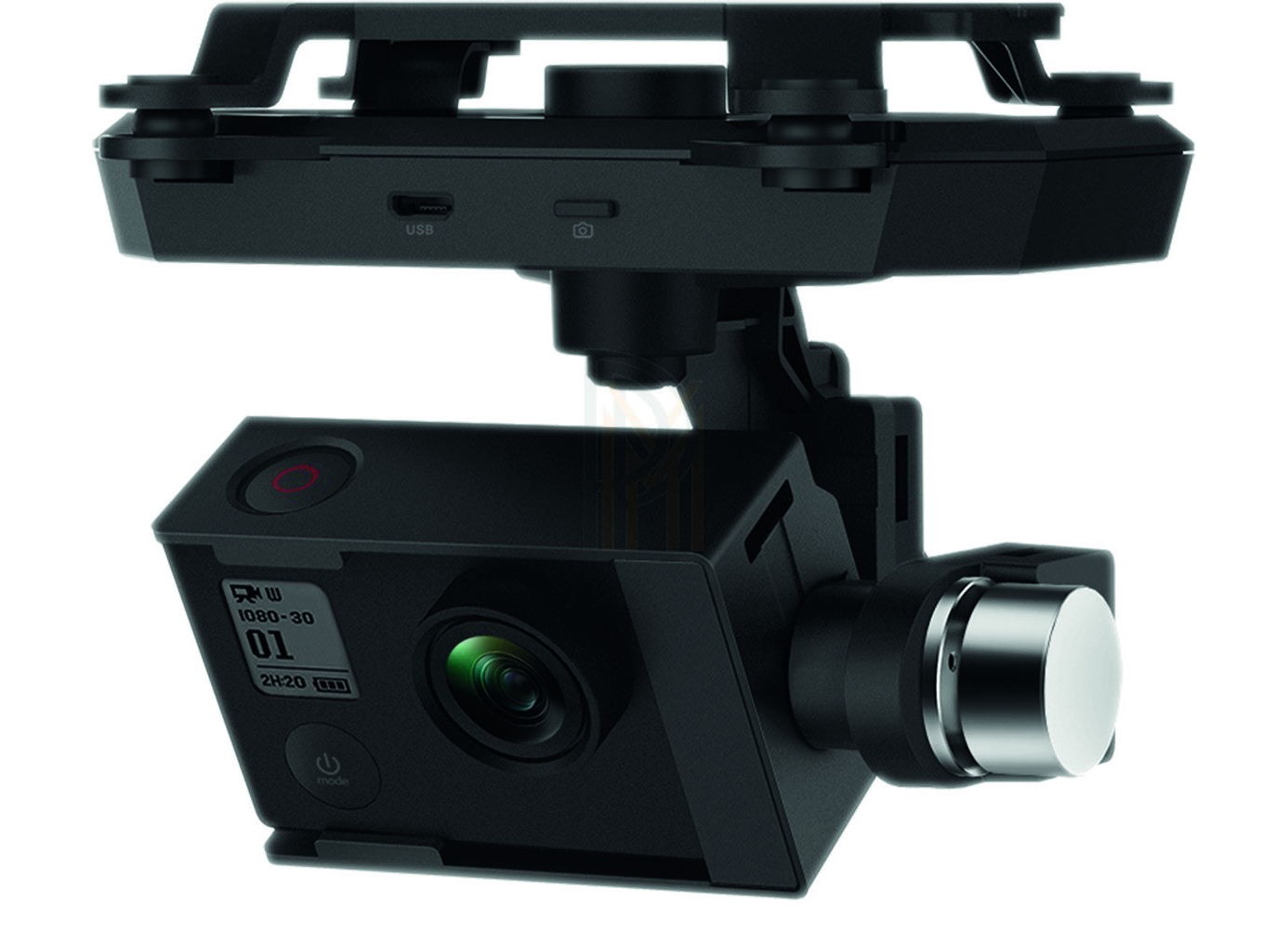 On the design side, the Xiro Xplorer G has a modern look with its matte black color. Light indicators were added below each of the four rotors of the drone to improve visibility while flying. Furthermore,  the 4 landing gear can be retracted to facilitate the storage and transport of the drone.

A nacelle stabilized on 3-axis for your action cam

Your drone is also equipped with a 3-axis stabilized nacelle that allows it to carry GoPro Hero 3 or GoPro Hero 4 cameras. This allows you to capture crisp, high quality photos and videos. With a simple slide on the side, install and remove your camera from the cockpit with ease whenever you want. In addition, the stabilized nacelle is removable and can be taken off if you want to lighten your drone and fly without a camera.

A quick start with a very functional radio controller

The wi XIRO app (available for Android and iOS), once installed on your smartphone, will allow you to get video transmission from the GoPro camera and view the flight parameters of the drone in real time on your device. For an optimal flight experience, you can install your smartphone at the top of your radio controller with a clip provided for this purpose. The clip has been designed to accommodate a smartphone up to a 6.5cm width. Thus, you enjoy the images captured by your drone live, while easily accessing the controls.

Note, however, that it will not be possible to trigger recording via this application, this must be done from the physical controls of the camera installed in the drone’s nacelle. 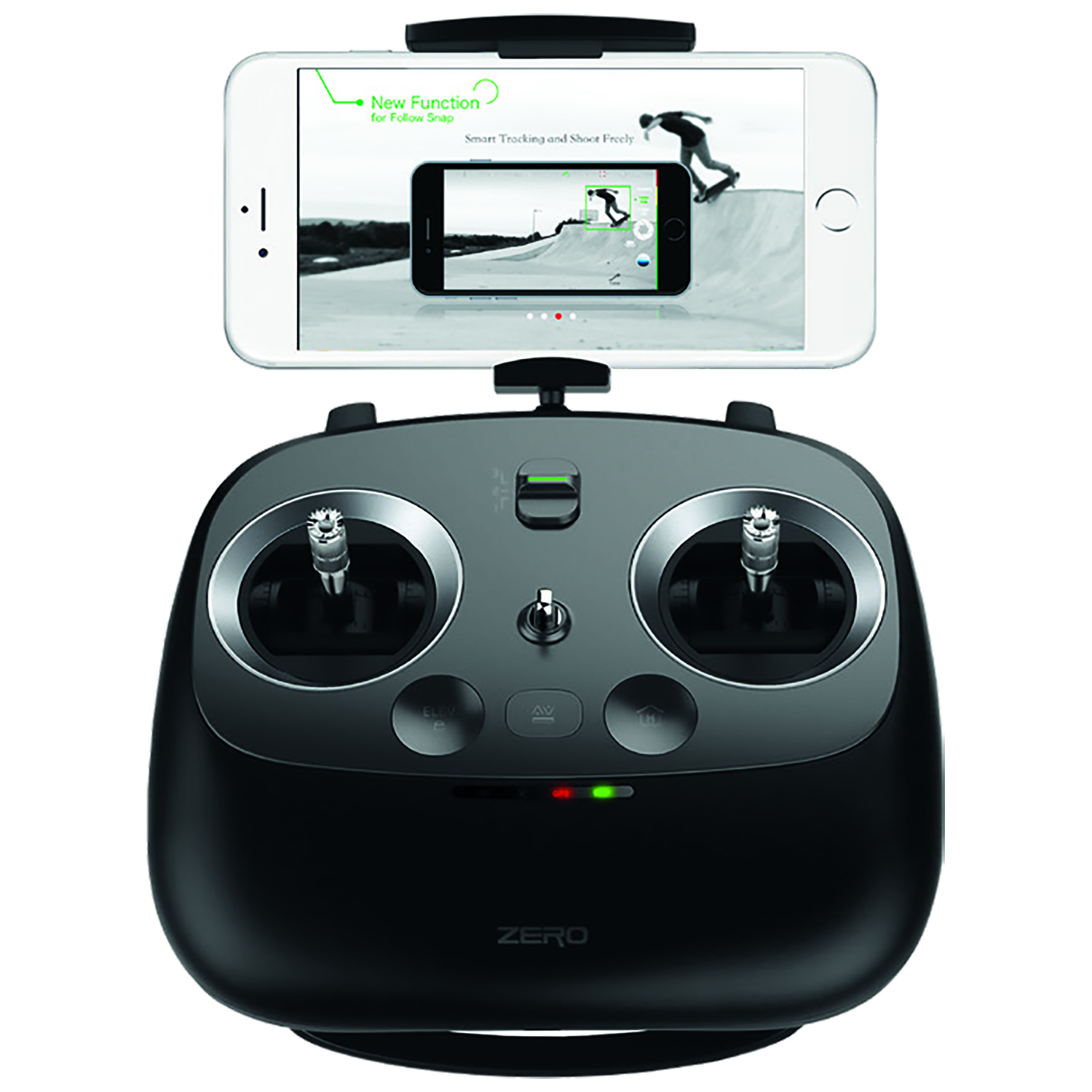 The radio controller is made of a matte black material, matching your Xiro Xplorer G drone. This is a professional 5,8GHz remote controller. Its rechargeable battery gives it an autonomy of 3 hours. If you experience low battery, lost connection or control range issue, your radio controller will vibrate to alert you. 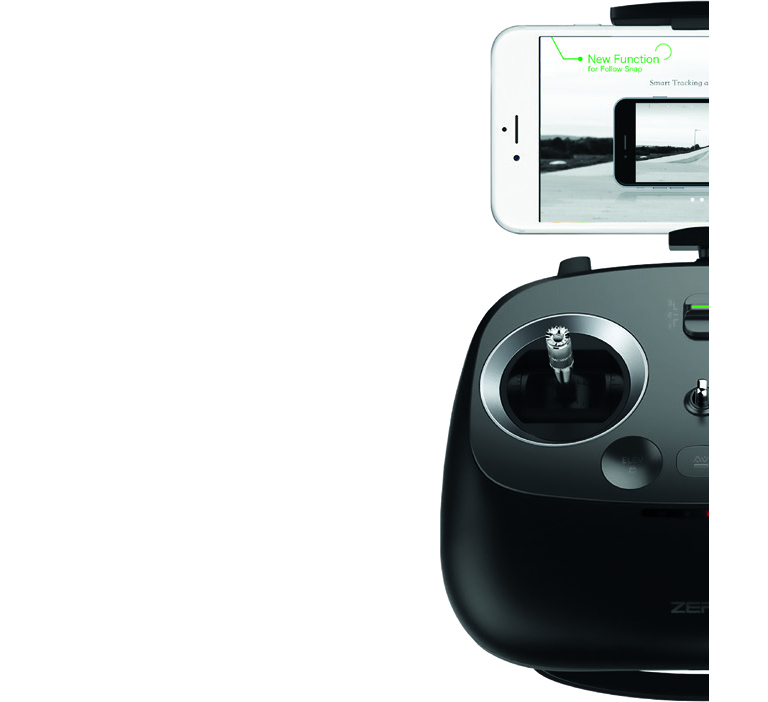 So many features at your fingertips

Control your drone easily with its joystick, select the control mode, trigger the automatic take-off or landing phases, activate the back home mode or the lock (headless) direction mode. Your radio control is also equipped with a built-in 2.4GHz wireless repeater that will allow you to extend the WiFi signal range of your smartphone. Thus, you can control your drone and enjoy the video livestram from a distance up to 500m.

The RTH function (Return to Home) is triggered automatically (in case of low battery, or passage of the drone out of range) or on request (one click is enough) so that the drone returns to its starting point.

The Waypoints also allows you to program a flight path  by memorizing up to 16 step points.

The Follow Me mode allows the Xplorer G to follow a defined object via the XIRO application at the desired altitude and distance, and at a speed of approximately 50km/h.

Plus, with the 360 ​​° Selfie option, your drone can fly in a circle around a selected object at the desired altitude and distance.

Many opportunities to multiply the original shots and give free rein to creativity.

The Xiro Xplorer G is equipped with a Li-Po 3S 5200mAh 11.1V battery that provides you with a flight time of 25 minutes per charge (full charging time is 90min). To optimize this flight time and to ensure that your drone flies safely, an automatic return system has also been developed. As soon as your Xiro’s battery level is getting low, the drone automatically redirects to its starting point and proceeds to a soft landing.

Wifi: Yes, image transmission and livestream up to 500m via the Wi XIRO app (iOS and Android)

Included in this pack :

Your questions regarding the XIRO XPLORER G

Nicolas: I’ve seen a lot of Xiro Xplorer models, what’s the difference between a V and a G?

These 2 models are actually very similar. The difference between the Xiro Xplorer V and the Xplorer G is at the level of the stabilized nacelle. The first ones are equipped with a stbailized nacelle including a camera allowing you to film in 1080p30ips (Full HD) and 720p60ips (HD).

The Xiro Xplorer G is equipped with a camera-less nacelle designed to accommodate your personal GoPro. So your aerial shots can now reach 4K!

You have a question ?

2-year
warrantyA problem with your drone or camera?
We have a simplified after-sales process to settle this as soon as possibleRead More